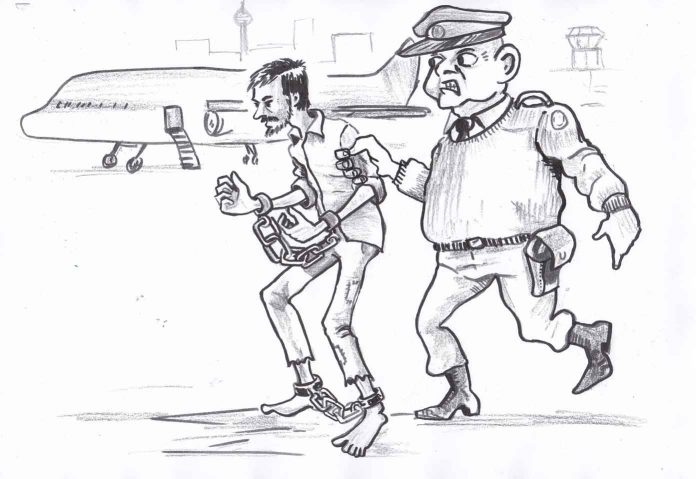 On Monday, September 27 – one day after the German Federal elections – there will be another mass deportation of Tamil and Muslim asylum seekers to Sri Lanka. The first of this unprecedented wave of mass deportations to Sri Lanka took place this year for the very first time on March 30, the second being on June 9.

Statements from Tamil politicians inside the island pleading with the German government to stop these charter flights, as well as statements from human rights and political organizations about the increasing dangers facing the Tamil and Muslim populations, were ignored. For our part, shortly after the first mass deportation, we sent a delegation to visit Sri Lanka and record the human rights situation of Tamils. This delegation has presented its findings to individual politicians in recent months.

However, it is becoming increasingly clear that an assessment of the situation in Sri Lanka has little to do with the decision to carry out these deportations. As, shortly before the first deportation, the German government itself co-authored UN Resolution 46/1, in which it was pointed out that attacks on Tamils and Muslims in Sri Lanka were escalating. So, the decision to increase the scale of deportations by an order of magnitude can have nothing to do with the German government’s assessment of the current situation in Sri Lanka.

We ask ourselves how it can be that a federal government signs a resolution that draws attention to the increasingly precarious human rights situation of Tamils and Muslims in Sri Lanka and demands that all international legal mechanisms be exhausted with regard to this. In addition, the country report of the German ambassador to Sri Lanka confirms the worsening human rights situation. How can such a government start be deporting asylum seekers en masse, knowing that they are threatened with persecution and oppression in the island? In addition, during the past weeks, we have seen Germany’s catastrophic policy of mass deportation to Afghanistan – which clearly ignored the human rights situation there in favour anti-foreigner politics in Germany.

The refugees are not only exposed to immense dangers in the country that they fled from. The threat of deportation has a traumatic effect on refugees. Exactly one month ago, a Tamil in Australia took his own life because he was threatened with deportation and could no longer withstand the fear of facing persecution in Sri Lanka.

Germany has taken remarkably progressive steps with respect to Sri Lanka (see its role in the peace process) and in refugee policy (in 2015 during the Syria crisis). Especially given its potential to do good in the world, all progressive minded people should appeal to Germany not to allow internal anti-foreigner politics during this run-up to the elections determine its asylum policy and in the final analysis its foreign policy.

We appeal to people all the international community to call on all those who stand for elections in Germany to speak out concretely against the deportation flight to Sri Lanka on September 27. We urge people from all countries to make statements (video statements if possible) which we will put on our internet site (so that the German authorities can see) – and also make representations to the German embassies worldwide.