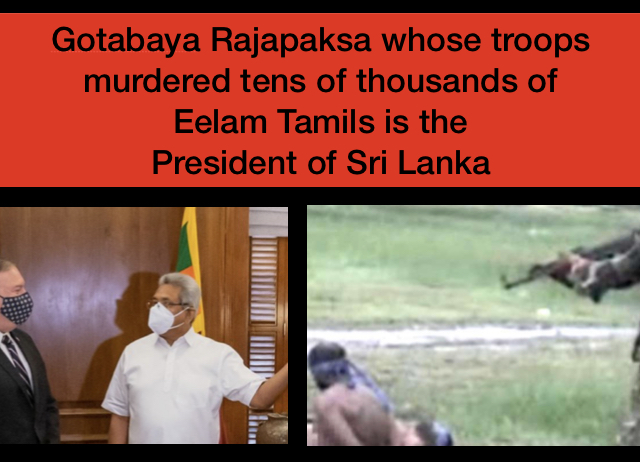 On the 30th March, exactly a week after the United Nations Human Rights Council (UNHRC) passed the resolution accusing the present Sri Lankan regime of ‘increased marginalization of persons belonging to the Tamil and Muslim communities…. arbitrary detentions, alleged torture and other cruel, inhuman degrading treatment, inhuman degrading treatment or punishment, and sexual and gender-based violence’, the German government which co-wrote this resolution, will deport about a hundred Tamil and Muslim asylum seekers to Sri Lanka. This German action will make a mockery of the resolution and give succour to the Sri Lankan government. It has been suggested that this astonishing state of affairs is the result of the German foreign ministry headed by Heiko Maas from the Social Democratic Party (SPD) not communicating with the interior ministry of Horst Seehofer from the Christian Social Union (CSU). It is also thought that the deportation was okayed by the controversially right-wing Seehofer with the expectation that this operation will be carried out in secret and therefore will have no political ramifications.

After we publicised the information that was leaked to us, and launched a public campaign, more details of this sordid story are emerging. We talked with one of those awaiting deportation Sithamparapillai Chandrakumar born in 1974 and now in Bueren detention prison in Paderborn. He was living in an asylum accommodation (he had lived in Germany for 7 years) and he got a letter from the ‘Foreigners Police’ saying that because of the COVID situation he should not come to get his visa extended –– the letter had said that there was nothing to worry about. Since he had lived in Germany for 7 years, and was working etc, and the situation in Sri Lanka was deteriorating, he took the information in the letter at face value and not take the issue of the visa expiring seriously. And then he got another letter with an appointment at the Foreigners Police. He went and he was asked to sign a letter – which the translator seems to say was about the state of the legal case – which he signed and then immediately the police arrived and arrested him. Without asking for his permission, they did a corona test. His phone was taken away from him and he was given a non-smart phone – This phone is what he used to communicate with us. This morning he has become unreachable for us and for his relatives. The police should have asked his permission before they took the COVID test, indeed in terms of natural justice he should have been informed that taking the test will be a precondition for his deportation. Instead, he was physically coerced into taking the test. Two Muslims (who are also persecuted in Sri Lanka) in the same detention center, Amil Mohamed Kamil and Mohamed Ibrahim Bazir, had a similar story.

There has been a battle in the information sphere on the human rights situation in Sri Lanka. Report of the Office of the High Commissioner for Human Rights A/HRC/46/20 of 27 Jan 2021 which formed the basis for the UNHRC resolution noted for example:

“38. These incidents [of recent use of the Prevention of Terrorism Act and deaths and custody] reflect the persistence of long-standing and endemic patterns of custodial deaths, torture and other ill-treatment, and extrajudicial killings by law enforcement officials with impunity. Furthermore, OHCHR has continued to receive credible allegations, through well-known human rights organizations, of abductions, torture and sexual violence by Sri Lankan security forces since the adoption of Human Rights Council resolution 30/1 [in 2015], including during the past year, which need to be credibly investigated.”

The Sri Lankan government’s response was immediate. They put a new terrorist list (link) of Tamil and Muslim organisations and individuals, most in the Diaspora – as a way of putting pressure on them not to engage in exposing the ongoing situation in Sri Lanka. This vengeful attitude is to be expected when the refugees arrive in Colombo.

When the refugee plane lands in Colombo, it is the responsibility of the German embassy to monitor the situation and keep track of those that the German government has deported. But our experience has been that the German embassy in Sri Lanka is unable or unwilling to monitor the situation even when one person is deported. So, our organisation has decided to send a team of observers to Sri Lanka from Germany and other countries – so that we can track the deported people and work with human rights activists on the island to report what happens to them. Some individuals have already agreed to do this but we need financial and political support to implement this massive operation. Deportation is a punishment that is usually a life sentence – sometimes a death sentence. And when the person or persons have been sent out of Germany it is seen as been all over. We will not accept this – we will ensure that the problems that the deported people face will be broadcast to the world and when possible take legal action to bring the people back to Germany.

Letters of protests against German deportations

Letters of protest against German deportations

Tweets on the German deportations