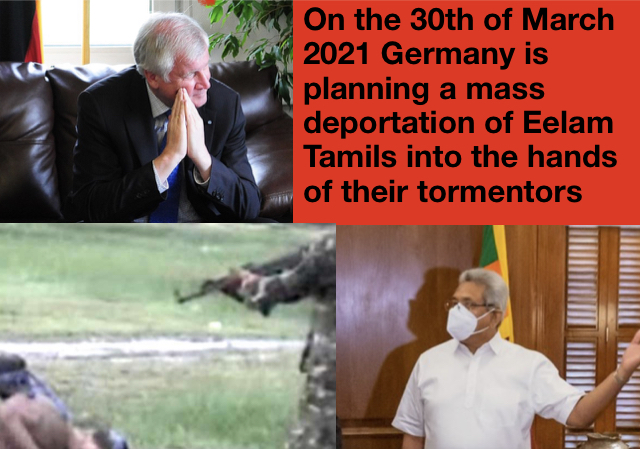 The Tamil refugee community in Germany has been subjected to a wave of dawn raids and arrests during the past few days. Relatives and friends do not know their whereabouts, the detained have had their phones taken away from them and communications severed. Some people have been lured to come to the foreigners’ police with the promise of a 2-year visa – then arrested and put in detention.

We have found out that they are to be deported on the 30th March on a special plane to Sri Lanka. We have heard from various sources that 31 are being held in Düsseldorf, approximately 50 at Frankfurt and 11 in Stuttgart. No doubt the numbers will increase before the 30th. It is difficult to verify these numbers because the communications with the victims have been cut.

When you consider that the United Nations Human Rights Council has just voted for a resolution — that Germany was involved in drafting — to have a UN team investigate serious and worsening human violations in Sri Lanka, it is easy to understand why the German authorities want to carry out this deportation with maximum stealth. The hypocrisy is startling.

On the 28th January the Commissioner for Human Rights Policy and Humanitarian Assistance for the German government, Bärbel Kofler (SPD) tweeted: “The report published by UN Human Rights Council yesterday is cause for grave concern about the situation of human rights in Sri Lanka. I am pleased that Germany remains committed to reconciliation and accountability, also through the Human Rights Council.”

Just a few days ago on the 23rd March, the UN Human Rights Council passed the German-backed resolution calling for international investigations. The UN Human Rights Council has budgeted resources that would be required in 2021 and 2022 for the Office of the High Commissioner “to collect, consolidate, analyse and preserve information and evidence and to develop possible strategies for future accountability processes for gross violations of human rights or serious violations of international humanitarian law in Sri Lanka”. Amongst the resources identified were a “Senior Legal Advisor with experience in international criminal justice” that would “coordinate the processes of reviewing and sharing of information with national authorities for universal jurisdiction and extraterritorial jurisdiction cases”. Other legal advisors, analysts, human rights officers, Juris-Linguists were also budgeted for, with a total of US$2,856,300 requested.

So, Germany while supporting a team of investigators tasked with examining the gross and increasing violations of human rights in Sri Lanka, plans to, at the same time, deport a hundred or so Tamil refugees to Sri Lanka. Is this part of a special investigation process in the spirit of the Salem witch trials? Is it a test to see if the Tamil refugees, who are demonised in Sri Lanka, will be treated in the same way that Gotabaya and Mahinda Rajapaksa treated their compatriots in 2009? (see the verdict of the People’s Tribunal in Sri Lanka here).

Apart from the anguish and fear this will cause the Tamil Diaspora, with this planned deportation of Tamils fleeing Sri Lanka into the hands of the Rajapaksa brothers, Germany will, by vouching for their safety, give a propaganda gift to the Sri Lankan regime. This will send a very negative signal to the current international efforts to address serious human rights violations that have occurred and are continuing to occur in Sri Lanka.

We call urgently on all to send us a video or text statement, which can be publicised and also sent off to the Foreign Minister and Inner Minister.

We urge the global Tamil Diaspora, and the international human rights community to organise delegations to German embassies on Monday Morning (29 March) to hand in documents and speak to the diplomats. We urge people to respect social distancing rules. Please send us information of planned actions and those which have already taken place so that we can put in on this site and can be an inspiration to others.

We must stop this atrocity.

Letters of protests against German deportations

Letters of protest against German deportations

Tweets on the German deportations