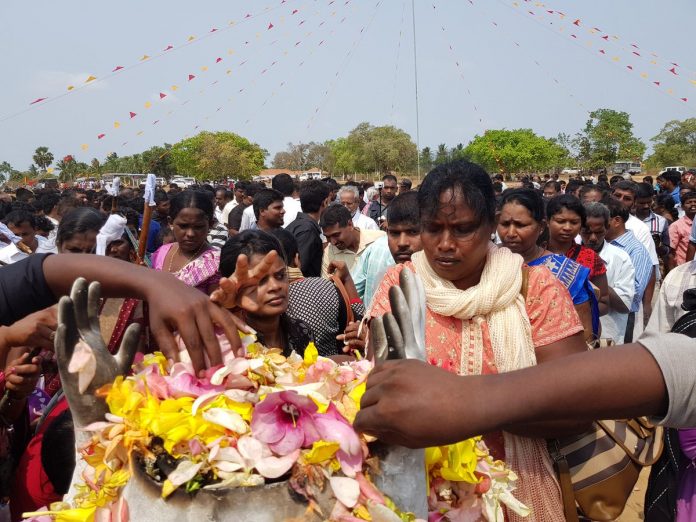 Speakers taking part will include:

The program will start with a German version of the song ‘You fell victim to a fateful struggle’.
There will be poetry in by Tamil as well as Sinhalese with German translations. There will be songs in Tamil. ‘Rote Pfeffer’ will sing a song about Rosa Luxemburg and Karl Liebknecht. There will be presentations.

The 18th May 2009 was the end of a war of extermination, that had, within a few months caused the death of over 70,000 Tamil people. The number for the casualties is from a report of an expert panel appointed by the United Nations. The true figure could be considerably more. What took place during these fateful months was exhaustively examined in 2013 in Bremen under the auspices of the of the ‘Permanent People’s Tribunal’ (PPT). The distinguished panel of jurors assembled by the PPT (an organisation that continues in the spirit of the Russel/Sartre tribunal on Vietnam) ruled that the crime committed against the Eelam Tamils was genocide. The Tribunal invited the ‘worldwide civil society and governments to commemorate the victims of the genocide that took place in Sri Lanka and acknowledge the anguish and trauma of the victims and their families by marking 18 May as ‘Mullivaikkal Commemoration Day’. This symbolic step can signal the redemptive process that the global community should embark on to safeguard the memory of the victims’.

However, none of the worldwide governments nor its apex body the United Nations marked the 18th May, nor did they recognise the genocidal character of the assault on the Eelam Tamils. Further, in general, civil society as well as communities without state power failed to recognise the plight of the Eelam Tamils. But in 2016 the ‘Indigenous Peoples Organisation of Ecuador’(FPIE) based on the Kichwa community made a magnificent act of international solidarity – by holding an impressive series of events commemoration the 18th May in Quito and Pucahuayco. Since then the collaboration between FPIE and our organisation IMRV-Bremen has deepened yielding important practical victories for the Eelam Tamils. We are very proud that they have come from Ecuador to support this commemoration in Bremen

The Bremen Tribunal also ruled that the USA and the UK is complicit in the Genocide of the Eelam Tamils. The judges in the Bremen Tribunal were very familiar with the way that the US/UK sabotaged the peace process in Sri Lanka – which had been strongly supported by Germany and the EU. In their pursuance of war in Iraq and the middle east the USA wanted the option to use the strategic harbour in Trincomalee which had been under the control of the Tamil resistance movement. For the US, a negotiated solution – where the Sinhalese and the Tamils would agree to share sovereignty was unthinkable – because that would lead to Tamil liberation movement retaining control of the crucial harbour and designate it a zone of peace. Therefore, we attach much value to the video messages of solidarity which we are expecting from the Korean peace movement for our event on the 18th in Bremen. Korean peace activists understand that the current period of discussions between the North and the South is very similar to the time in 2002 when the Sri Lankan peace process started. Their solidarity is based on the understanding that the international forces that were intent on sabotaging a negotiated solution between the north and the south Korea are the same as in the Sri Lanka -Tamil Eelam situation. The Japanese peace activists, and anti-US base activists in Okinawa are expected to send a video message to our event.