Home News How Dilan’s torment relates to all of us 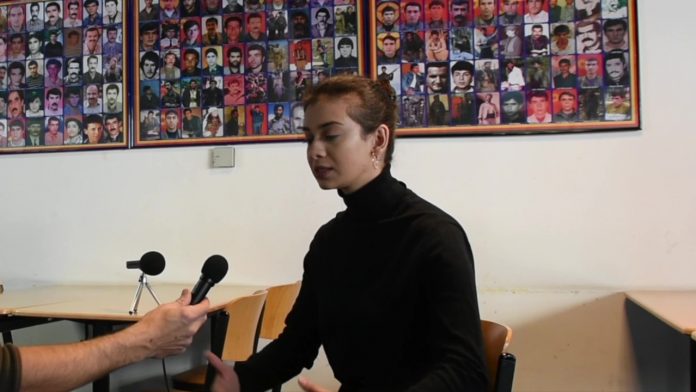 Dilan’s father, Yüksel Koç is on indefinite hunger strike to stop the isolation regime imposed on the imprisoned Kurdish leader Abdullah Öcalan. In describing her feelings about it (in the video below), German born Dilan raises uncomfortable questions to those of us living in Europe. The terrible situation that Dilan finds herself was set into motion 20 years ago – and it was as much to do with Europe as it was with Kurdistan.

news —- the hunger strike has been stopped — thanks for your support

Europe’s cowardice leads to the Kurdish leaders’ abduction
In late 1998, with the backing of the USA, Turkey threatened Syria with invasion if it continued to give safe haven to the leader of the PKK. This was a period when US/UK military action in the middle east was escalating and war clouds were gathering in preparation for heavy strikes on Iraq. Within Europe there was much opposition to the US/UK war policy – from the population as well as the Governments. Abdullah Öcalan and the PKK were confronted with a fateful choice. He could leave Syria and go to the mountains in Kurdistan and consequently intensify the guerrilla struggle or go to Europe and pursue politics of a negotiated solution to the Kurdish question and by example promote peace throughout the middle east. Based on an optimistic assessment of the strength of the political opposition to war, in Europe, Abdullah Öcalan put his life and freedom on the line by coming here. From November 1998 to February 1999, the period he was in mainland Europe, an intense political battle took place between those European forces who wanted a negotiated peace in Kurdistan and those who wanted a military solution. These political/legal struggles took place in Italy, Greece, Germany, and Holland. To its eternal shame, Europe could not stand up to US statecraft. Quoting a high-ranking American officer, the New York Times stated: ‘American diplomatic pressure backed by intelligence-gathering helped, ….to persuade nation after nation to refuse him sanctuary, and to drive him into an increasingly desperate search for a city of refuge…’. Finally, he was forced to leave Europe and was abducted in Kenya and taken to Turkey. As Robin White for the BBC in London asks its Nairobi correspondent Louise Tunbridge. ‘But, why would the Kenyan Government want to be getting involved at all in getting Mr. Öcalan handed back to Turkey, unless perhaps, you know, there was some pressure from the Americans? Louise Tunbridge responds: ‘Exactly, …. perhaps the CIA perhaps MOSSAD, came in and did a deal… ‘

Is history going to repeat itself?
Now, 20 years later, with over 2 million people killed in wars in the middle east, the Kurdish leader’s message of peace through negotiations is needed as ever before. His stature amongst the Kurdish people – which is as strong as Nelson Mandela’s was amongst black people in Apartheid South Africa – makes him an essential element in negotiations and peace talks. However, the 70-year-old Abdullah Öcalan is under such an extreme isolation regime that the last time he was allowed to speak to his lawyers was in 2011. Will the progressive-minded people in Europe allow their political representatives to stand by while Abdullah Ocalan’s voice is silenced and his life extinguished?

It is possible to change the situation?
Today, as it had in 1999, Europe has the ability to make a decisive difference. The severe human rights violations and the prevention of his meetings with lawyers is an open breach of the ‘European Convention for the Prevention of Torture and Inhuman or Degrading Treatment or Punishment’ – which was signed by Turkey in 1988. It is also an open break from the 1954 Convention signed by Turkey for the Protection of Human Rights and Fundamental Freedoms. Council of Europe, of which Turkey is a member, is the body which can bring consequent pressure on the Turkish state. The European Council established the European Committee for the Prevention of Torture and Inhuman or Degrading Treatment or Punishment (CPT). The CPT is an institution that regularly visits facilities where people are deprived of their liberty to prevent torture, inhuman and degrading treatment before it happens. But the applications submitted to the CPT by the Abdullah Öcalan family, lawyers and Kurdish institutions were fruitless. Because the EU, the Council of Europe and the CPT have made no attempt to prevent the mistreatment and isolation of Abdullah Öcalan, the imprisoned Kurdish Parliamentarian Leyla Güven started a hunger strike in November calling for the ending of the isolation regime of the PKK leader. Thousands of prisoners joined her. In solidarity, Dilan’s father Yüksel, a leading political figure in the Kurdish Diaspora, and several of his colleagues started an indefinite hunger strike in Strasbourg in December 17 last year.

‘Ich bin Bremerin’
Dilan was born and raised in Bremen. She is a Bremerin. She has been socialised in Bremen. She is a daughter of Bremen. But she is the daughter of Yüksel too. Can she be both? Does the society that she has integrated into – into Bremen, Germany, and Europe – have the necessary ethical values she now expects and needs? Or will it fail her like Europe failed Abdullah Öcalan in 1999?
Dilan talks about German weapons being used against the Kurds. Certainly, no one can dispute that in their efforts to topple Assad most western countries gave weapons to Anti-Assad forces. It is not surprising that these weapons found their way to the most virulently anti-Assad forces: the extremist Islamic groups. For these groups, exemplified by ISIS, the Kurds, with their secular and socially progressive politics constituted the bitterest enemy. When Dilan is questioned about US support for the Kurdish YPG – she says ‘to put it sharply, the Kurds are good enough to destroy ISIS…. but still we won’t accept them – That is contradictory’. Dilan like most Kurds understands that the American support for the YPG fighters is not based on any ethical principles. That US policy is utilitarian. That it will support, a certain group who is against the USA’s current enemy and if and when that enemy is destroyed, the Americans could well turn against the group that it was in alliance with. The endless war this policy produces is purportedly opposed by the EU – whose very formation was based on the prevention of war. This peaceful intent, that the EU is based on, surely must not only apply to a full-scale world war – but also to proxy-wars that are raging in ‘the periphery’ – especially as they have invariably been initiated by the center – the powerful western countries.

Will you make a stand?
The desire for peace and justice does exist within the hearts of the population in Bremen, in Germany, in Europe. Abdullah Öcalan in coming to Europe – put his person, his body on the line in the expectation that this desire for peace and justice exists within Europe. Now two decades later Dilan’s father, is putting his body, his life on the line – optimistic that European society will respond positively. Dilan – the new generation, who is part of Europe will test this society much more deeply.
Time is running out – the physical condition of the 17 hunger strikers in Strasbourg in deteriorating rapidly. The type of hunger strike that they are enduring is where liquids with a little sugar and salt are taken as well as vitamin B1 for brain function. Whereas the type of hunger strike where there are zero calorific intakes has a life expectancy of around 70 days, this type has a longer life expectancy. However, at the time of writing, the Doctors say that even if the hunger strike ends today, the damage to their internal organs could result in serious complications. The most concerning issues are muscle atrophy, cardiac issues, insomnia, and hunger-based damage to the nervous system.

Will you respond? We want to make our website into a video petition. Will you make a short video with your personal message to show that the society in Bremen, Germany, Europe contains people with the ethical values that Dilan hopes it has? You can even use a mobile phone to make the video and send us the video through Dropbox or some other means. Once we have several videos on our site – we will ensure that members of the European Parliament, the various governments in Europe and the relevant bodies that we have mentioned above will see the videos coming in on to our website.
Internationaler Menschenrechtsverein Bremen e.V
imrvbremen@gmail.com