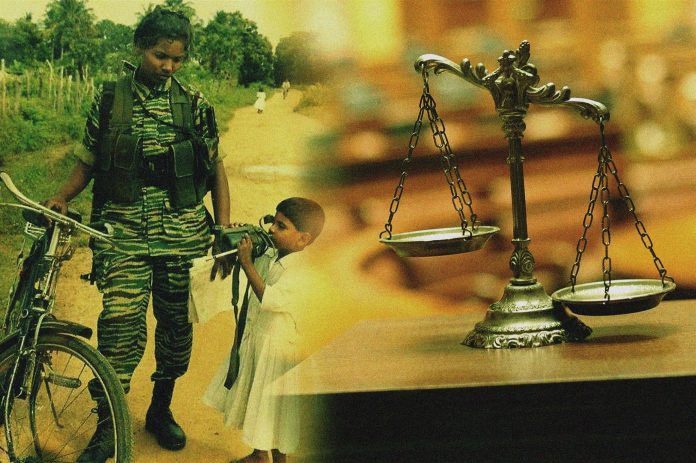 On the 14th June 2018, the Federal Court in Bellinzona, Switzerland comprehensively rejected the case put forward by the Swiss prosecutor office against a group of Eelam Tamil activists. As reported in the ‘Tagesanzeiger’, one of the main Swiss newspapers today: ‘Gian-Andrea Danuser, who defended one of the credit intermediaries, described the verdict as very precise, strong and courageous. The court was not afraid to comment on the political implications of this case.’

From the time when the court case began in January this year, our website was dedicated to pointing out the dangerous political implications of this case. The fact of the matter is that the prosecutor, in order to prove that the LTTE was a terrorist and a criminal organisation rehearsed the most outrageous Sinhala chauvinist arguments. These were comprehensively rejected by the judges – ruling that in their view the evidence did not lead them to the conclusion that the LTTE was a terrorist or criminal organisation. The presiding judge went on the effectively reprimand the prosecutor, stating that the federal court was not the venue to even make such an examination.

Instead the judges ruled that Tamil activists leading the World Tamil Coordinating Committee in Switzerland used fraudulent methods to enable a considerable number of swiss Tamils to obtain loans from a bank. The judges gave that main leaders non-custodial sentences and token fines – stating again that the prosecutor had been wrong to politicise the case. This completely repudiated the demand from the prosecutor that one of the accused is given a custodial sentence of 6 and a half years – based on support for terrorism!

There was much invested by the prosecution portray the Tamil activists as criminals and terrorists. For this project – the Swiss authorities were willing to launch the biggest court case in its history – spending more than 4 million Francs. The prosecutors arguments – some that will even make a hardened Sinhala racist blush – like blaming the Tamil refugees for causing the death of their brothers and sisters in their homeland – have appeared in the Swiss media during the past year. This case has retraumatised the Tamil Diaspora community in Switzerland. Several weeks ago, speaking about the effect of the court case, a young Tamil socialised in Switzerland said this in the Tagesanzeiger:  ‘I feel it in the tram, at the train station, on the street: people look at me and think I’m a terrorist. So, my Swiss passport is no longer worth anything’,… ‘I thought, I know Switzerland. Why does she disappoint me so much? Why does she take away my dignity, by not recognizing an important part of my self-image?’

The political component of this trial within Switzerland – will not be halted by the decision of the court alone. But the decision of the court is a powerful message to Switzerland and to other countries specially in Europe to revert to an honourable position of supporting peace through negotiation like they did at the beginning of the peace process in 2002. It is a riposte to the political steamroller by those international forces that supported the military solution in Sri Lanka – the political steamroller that justifies their position – which can only be done if the Tamil side is criminalised and blamed for the terrible events in 2009. This court decision has opened up a political space for the Eelam Tamils in the homeland and well as in the Diaspora.

People should understand that this decision has not come like Manna from heaven. It has come because of a hard political/legal battle. You cannot win political space for Eelam Tamils without a struggle.

First step would be to appreciate superb and aggressive defence by the lawyers and the political solidarity which helped to shine an international spotlight to the case. The Indigenous people in Ecuador, with their early input to our selfie campaign played a leading role again. Again, I say, because theirs was the first community to recognise the Tamil genocide when they held a commemoration in Quito in May 2016.

We should also recognise the magnificent input to the selfie campaign by the 17th May movement in Tamil Nadu. And the solidarity from the Basque activists, Rohingya refugees in Ireland and activists from all over the world. The Korean peace movement recognised that the current period of discussions between the North and the South was very similar to 2002 when the peace process in Sri Lanka began. Their participation in the selfie campaign was based on the deep understanding that the international forces that were intent on sabotaging a negotiated solution between the north and the south Korea were the same as in the Sri Lanka -Tamil Eelam situation. The Japanese peace activists made an open stand with us with the same understanding – knowing also that Japan’s role in Sri Lanka then was very similar to its role in the Korean situation now.

Our political campaign shows the merit of depending on our real allies – they are the ones who will bravely put themselves forward – it is developing these allies that will take the struggle forward. False friends, although they might appear powerful and alluring will not help us to build a solid international political space.

Early in the process – on the 16th January – Philippe Graf, one of lawyers defending the Tamils asks the court in Bellinzona:

‘Your refusals are less well motivated than my questions. But why these refusals? And what are we to think about them? Wherever one goes in this tower of Babel, in this enormous dossier, one always ends up blocked in front of a door, always the same door, that no-one seems to be able to open. Which power keeps us from looking behind? Is there something more powerful than this court? Something more influential than the laws of the parliament? Is there a fourth power that guides you in your refusals? And, then I ask myself: Is this not a political trial after all?’

Our organisation will take steps to find evidence to uncover this fourth power.

We handed out a leaflet which we prepared specially for the Rosa Luxemburg/ Karl Liebnecht commemoration events on the 13,14, 15 January in Berlin. You can find the leaflet here.

we would appreciate similar photos of support from Tamil people from all over the world (slogans on your placard can be in any language) and people of any nationality.

PDF Document (we are no longer collecting signatures for this petition)